BatGals are succubi enemies that appear frequently throughout the Shantae.

BatGals resemble humans, with yellow eyes and teal skin. They wear a black helmet with wing-like horns, black shoulder pads with spikes, black gloves, black top and black boots. They have tails alike to that of a devil, ending with a triangular shape.

BatGal make their first appearances in Shantae as mini-bosses in the Cackle Mound and Twinkle Palace. They jump and launch a spiky ball at Shantae, and the reach it to launch it again.

BatGals return in The Pirate's Curse in Cackle Tower, after their absence in Risky's Revenge. They have the same abilities as in the previous game. When they are defeated, they scream, turn in stone and crumble.

BatGals make their return in the Pirate Queen’s Quest DLC. They turn in bat forms and reverts to attack the player with their flails. When defeated, their clothes rip apart as they scream and vanish.

BatGal's sprite in The Pirate's Curse 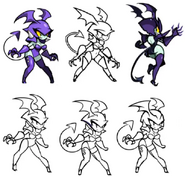 BatGal (concept art)
Add a photo to this gallery
Retrieved from "https://shantae.fandom.com/wiki/BatGal?oldid=21412"
Community content is available under CC-BY-SA unless otherwise noted.