Shantae, Sky, Risky Boots, Girls in general, Being a hero

Being left out, being attacked by Wrench

Shantae
Bolo is a fighter and a life-long friend of Shantae's. In Shantae, he helped Shantae once by opening the Dribble Fountain for her. In Risky's Revenge he served as a guide, giving hints to Shantae. In The Pirate's Curse, he gets unwillingly involved in misadventures, but he saves the day by unintentionally sabotaging a piece of Ammo Baron's cannon.

Bolo is an NPC for most games, but in Half-Genie Hero, he is playable in the Friends to the End DLC, alongside Sky and Rottytops.

Bolo has navy blue hair, a yellow headband, and frequently wears a determined expression. A white bandage is wrapped around his right upper arm. He wears a white tank top underneath a short blue vest and has dark blue shorts. He also wears tan gloves with metal rings around the cuffs. In Risky's Revenge, he has bandages wrapped around both arms and does not wear a jacket. Throughout all of the games, his shoulders appear to be very boney.

Bolo is described as a "block-head hero for hire". Supposedly, he springs to life when he has a chance to fight, but he's often left behind during Shantae's adventures and has yet to show off these skills.

Bolo is frequently trying to seduce girls or spy on them, including Risky Boots in the first game, but fails every time. He's shown to be jealous of Bran-Son's popularity. However, he has a more argumentative brother-sister relationship with Shantae. Bolo serves as a sparring-partner and punching bag for Shantae, and as an assistant for Mimic. Bolo is the one who taught Shantae her Fighter Moves.

It is revealed in the third game that Bolo is nearsighted, although this may be just him being too literal.

He first appears when Shantae visits his gazebo in Water Town to ask about Risky Boots and the Dribble Fountain. Bolo tells her that Risky indeed came, and as he is completely submissive because of her charms, he indicated her the way to the Fountain. Shantae berates him and tells him to meet her there. He later meets Shantae at the Dribble Fountain to open it as promised, and stays outside, in case Risky would try to flee. However, when Shantae reunites with him after exploring the labyrinth, she finds him knocked out by Risky (and visibly delighted for that). Therefore, she scolds him once again and then heads to Oasis Town to meet Sky (which, coincidentally, is near where his Granny claimed the Golem Stone was hidden). From then on, he remains in his gazebo and gives advice to Shantae on her destination whenever she comes to visit.

He is first seen greeting Shantae after she defeated some monsters and telling her that he was going to the Relic Hunter Expo, asking her if she wants to come with him. He also informs her that Sky and Wrench also flew in that morning to see it; this reminds Shantae of the egg she was taking care of for Sky. When Shantae returns with the egg Bolo notes that it smells like his Grandma. He then berates her, calling her the worst egg-sitter ever and not to blame him if Sky finds out.

Later at the Expo, after Mimic opens up his discovery Bolo and Sky note that it looks like an oil lamp. Risky then appears and takes the lamp, and Mimic tells that either him or Sky to go after it but Shantae goes ahead of them. He can later be met alongside Mimic in the Relic Hunter Hall and provides tips if talked to. After Shantae is done with the Hypno Tower, Sky and Bolo move to Shantae's lighthouse, and inform her there that Mimic is missing. The Squid Baron then arrives to tell Shantae he's been abducted by Rottytops (who betrayed Shantae), Abner Cadaver and Poe, and from then on, Sky and Bolo simply encourage Shantae to get him back and stay behind until the end. During the ending in front of the lighthouse, after Shantae has lost her genie powers, Sky, Bolo and Mimic promise they will help her protect Scuttle Town from Risky and even Rotty from then on.

Bolo appears near the beginning of the game, as he is shown defending Scuttle Town against an attack by the Ammo Baron, alongside Sky and Wrench. He later appears on the other side of town with Sky, warning Shantae that the Baron is waiting ahead. Later Shantae finds him outside Sequin Land Palace just after installing the new lock on the door wrong, he is surrounded by Zombie Children and Shantae must find Flesh Pops to give to the children to save him and Bolo gives her the key to the door which was in his mouth. Later on, he helps Shantae get the Death Mask and reveals that he is nearsighted. Later on, he joins the Techno Baron because the X-ray Specs supposedly made him look smart, which results in him indirectly saving the day by failing to assemble the weapon correctly.

During Shantae's story mode, he attempts to help her rescue the maidens that the Techno Baron has kidnapped, but ends up stuck in the factory himself, eventually getting freed by Shantae. After the Techno Baron is foiled, Bolo spends the remainder of the game in Mimic's workshop, and later shows up in the good ending.

Friends To The End

Bolo, Rottytops, and Sky enter Shantae's mind in order to reverse the effects of the dark magic. While trying to help Shantae, Bolo often gets insulted and ridiculed by his companions, who often argue with each other instead of helping. However, he's surprisingly level headed and does well at keeping the team together. Towards the end of game, Sky admits that he's one of the most determined people she's ever known.

As Shantae's sparring partner, punching bag and occasional combat teacher, he possesses huge strength lying within him. During combat, Bolo relies mostly on martial arts, brute strength and his own equipment, however he's capable of using magic to summon some items to help him out in dire situations.

In the game Bolo's abilities and weapons which he can use are:

Bolo helps carry luggage off the airship when he arrives on Siren Island with Shantae, Mimic and Sky. His hotel room is on the Far West side of the island, and while he can initially be found there, he later moves to Tree Town looking for something to eat. Unlike Sky and Mimic, Bolo doesn't warn Shantae not to go out by herself, though Shantae takes his silence as a sign that he agrees with Sky and Mimic ("Even Bolo's on their side!"). He inadvertently helps Shantae with her quest by directing her to the barnacle in his trashcan in his hotel room, and later by trading some metal nuts and bolts he was chewing on for some melba toast. Later, he travels down to the Squid Pit along with Sky to keep the island from exploding while Shantae works to rescue Rottytops.

Bolo appears alongside Shantae as a playable character in Apple Watch game: Watch Quest!. However, he is not the same Bolo from the Series making him an "alternate universe" counterpart to regular Bolo. While his appearance is mostly the same, he wears a red cloak and wields a greatsword as opposed to his normal ball and chain.

He appears in the demo and Shantae complains to him about the music. He would have been a playable character in multiplayer battle mode, but the game got cancelled. 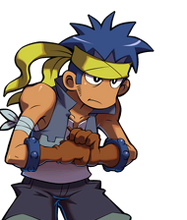 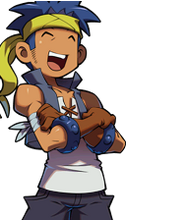 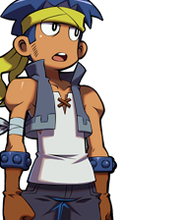 Bolo with his weapon (Pirate Curse) 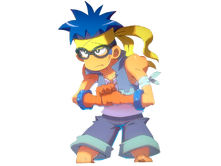