Shantae can learn multiple transformations, each of which gives her different abilities and allows her to access new areas and items. She learns them from Guardian Genies and Magic Fountains, both of which are found in the games' labyrinths (with the exception of the Elephant form in Risky's Revenge, which is in the Forest Cave). She can also buy form dances from certain merchants. She cannot transform in Shantae and the Pirate's Curse as she lacks her genie powers throughout the game. 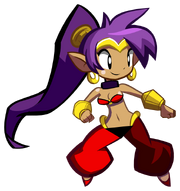 It's Shantae as her regular self. She can use magic attacks as well as her regular hair whip attack. She's also capable of crawling slowly through low spaces and, starting with Risky's Revenge, swimming on the water's surface. Her human form's greatest advantage over the other forms is combat - she has access to more moves and magic powers in this form compared to the others.

allows the monkey to attack ( 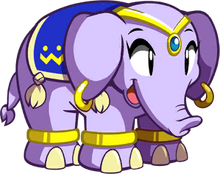 allows her to perform the stomp move, a downward attack while in mid-air (

In Half-Genie Hero, it is gained for clearing Tassel Town. This form's large size allows it to withstand sand storms. 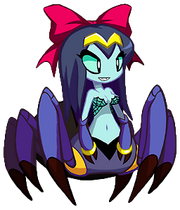 The Spider is the third form she acquires in Shantae (Cackle Mound). It allows for wall-crawling like the Monkey, but on background walls rather than walls in the foreground.

allows her to attack. The dance sequence is

In Half-Genie Hero, the Spider Form returns with a new look that resembles the mythical "Arachne", rather than an actual spider. It is an optional form found in Tassel Town, and is changed to having the ability to crawl on the ceiling after doing a double jump or jumping in mid-air. She is also able to spit spider venom like in Shantae. However, the form was originally planned to also climb up webs, fire webbing to wrap up her foes and drain health from the wrapped enemies. This transformation is the only one that can duck. It is also the only returning form to go from being a required form to being optional. 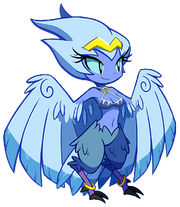 The Harpy is the fourth and final form found in Shantae (Twinkle Palace). She can fly through the air (tap

allows her to attack with claws (

In Half-Genie Hero, it is gained for clearing Hypno Baron's Castle. Repeatedly tapping the jump button allows Shantae to fly, and collecting the Harpy Talon allows Shantae to attack with feather projectiles. As a compensating drawback for the freedom of movement, this form has high horizontal inertia and is unable to glide, making it hard to navigate obstacles with precision. 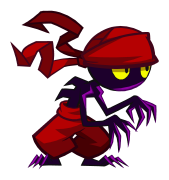 The Tinkerbat is an optional secret form in Shantae (Advanced Genies! (500 gems)) in Bandit Town, available only if the game is played on a Game Boy Advance (or through Debug Mode). She can climb on walls and background surfaces, wall jump, and charge with a battering ram (by pressing

In Half-Genie Hero the Tinkerbat returns as exclusive DLC for backers who contributed $55 or more to the Kickstarter campaign (but was later made available to all players in the game's Ultimate Edition). This form attacks with a sword and can hover for a short time using the jump button. To obtain it, Shantae needs to purchase the Dryad Dance from Tuki, then trade it for the Tinkerbat dance. 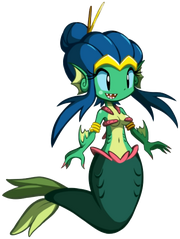 In Half-Genie Hero, it is found in Mermaid Falls. Certain enemies won't attack this form, and will help attack other enemies when Shantae uses Mermaid Bubble.

The Crab is a new form rewarded to Shantae for clearing Mermaid Falls in Half-Genie Hero. In this form, Shantae gains the ability to freely move along surfaces under water and descend slowly like a parachute in open water. Shantae also gains the ability to tuck into her shell when on a surface and is invulnerable in this state. Because this form is small, it can go through gaps the Mermaid form cannot pass. Gaining the Crab Claw lets this form attack and snip certain obstacles.

It was originally planned to appear in Risky Revolution. Back then, it was supposed to be able to run and drop in the water like a parachute (much like in Half-Genie Hero), allowing Shantae to reach more underwater places. This ability was supposed to become useless further in the game, as it would be outclassed when Shantae gained the Mermaid Form.

An optional new form introduced in Half-Genie Hero that is found in Mermaid Falls. This form only allows Shantae to fly horizontally, but it does not need the repeated pressing of the jump button to fly like the Harpy form, and is more stable to control. It can also fit into small gaps. Gaining the Bat Sonar lets you see in the dark within a short radius.

An optional new form introduced in Half-Genie Hero which is bought from Tuki for 100 gems. This form allows Shantae to produce up to three Oranges at a time in exchange for magic. This form can't move or attack, but is completely invulnerable.

An optional new form introduced in Half-Genie Hero, it is gained from trading the Obliterate Dance with Tuki, which costs 300 gems. This form has Shantae continuously bounce around as a blobfish. The bouncing damages enemies but one wrong move and Shantae takes damage instead. It is not considered a water-based form for the purpose of the Waterfall Relic, despite being a sea creature.

An optional new form introduced in Half-Genie Hero, it is gained from trading the Warp Dance with Tuki, which is bought from her for 200 gems. This form lets Shantae produce Gems in exchange for magic. Like the Dryad form, it cannot move or attack but is invulnerable.

An optional new form introduced in Half-Genie Hero, it is gained from trading the Super Revive Dance with Tuki. It is a reference to the Sophia 3rd vehicle from the Blaster Master series. This form moves at double speed (like the Monkey) and can fire blasts of energy either forward or upwards at a high rate.

How to get: Once you’ve acquired the Super Revive Dance from the Snake Lady salesman (in any of the main Shantae Modes), you can trade it back to her for the Sophia III Transformation Dance!

A very special thank you to Inticreates and Sunsoft for this adorable crossover!

Shantae gains access to these forms through Fusion Coins, given to her whenever she rescues a fellow Half-Genie. Unlike her transformations in other games, she is still able to use secondary spells (such as pike balls, shields, and fireballs) while using these forms. Shantae doesn't need to dance to access these forms, as they automatically activate when needed.

Seven Sirens introduced a new form with abilities similar to the monkey called the Dash Newt. It can scale walls and dash into enemies or objects with a single push of a button.

The Gastro Drill in Seven Sirens allows Shantae to burrow into soft dirt areas, and drill into another area of the level.

The Bonker Tortoise form in Seven Sirens gives Shantae the ability to do a spin attack and a stomp attack. This form can also be launched out of large cannons at high speeds.

In Seven Sirens, the Sea Frog can swim through the water at high or low speeds. It has a full range of underwater movement, like the Mermaid form, but can fit into small gaps like the Crab.

Jet Octo is a brand new form in Seven Sirens. It allows Shantae to boost through the air on jets of ink vapor, giving her a double and triple jump.

Several transformations were proposed in Shantae: Half-Genie Hero's development period. Contributor-tier Kickstarter backers had the opportunity to vote on these. A few forms used as examples are in the gallery below. The bat and fiddler crab transformations were added to the game, with design changes.

original HGH concept of the Crab form when it was a Fiddler Crab. Back then, this form would have supposedly allowed Shantae to dig up buried items before it was changed.

Tiger form. This form would have allowed Shantae to scurry up trees.

Pill Bug form. This form would have allowed Shantae to roll up into a ball.

Frilled Lizard form. This form would have supposedly allowed Shantae to run across the water like a basilisk lizard.

Naga form. This form would have allowed Shantae to slither and sing.