Frog Fish is an enemy in the Shantae series.

Shantae
Frog Lips are found on the walls of Waterfall Lake. They have four legs that extended from their bodies and has the look of a fish. They also have singular eye.

Once sighted, they jump down and begin hopping around randomly.

In The Pirate's Curse they can also shoot dead fish at Shantae. They have a minimum HP of 20.

Froglips return in HD, with the same behavior as in Pirate's Curse. Their Monster Card doubles the damage of fireball attacks when equipped. 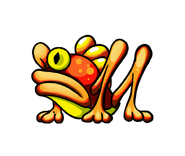