(Human after Risky's Revenge and during The Pirate's Curse)

Shantae
Shantae is the main protagonist of the Shantae series. The half-genie guardian of Scuttle Town, Shantae works tirelessly to thwart the plans of the nefarious lady-pirate, Risky Boots. She was created by Matt Bozon and Erin Bozon.

Shantae is a half-genie, whose job is to protect her home, Scuttle Town. Shantae utilizes magical abilities to help her in her adventures.

Shantae is a professional belly dancer, her outfit usually consists of sheer harem pants, a bra, and gold jewellery. This look is also known as the red bedlah attire and is the default look in every game, though it does change slightly as well. She has a relatively thin yet curvy figure and is rather short compared to some other characters in the game. Shantae has olive/tan-skin with blue eyes, and long growing purple hair tied back in a ponytail stem stalk. Her parentage is uncertain, but it is known that her mother was a genie and there is speculation about who her father was.

Throughout the series, Shantae has had the ability to transform into many different things by using her magical powers. Depending on the adventure and circumstance, she also has worn many different outfits.

In​ Shantae , as the Guardian Genie of Scuttle Town, Shantae lives in a lighthouse by the sea where she can

spot incoming ships and trouble. During the events of the first game, she is portrayed at the beginning as young and somewhat naïve. In addition, her strong sense of justice drives her to help people in need. She chases Risky Boots across the map in order to stop her plans and has a strong enmity for the pirate as a result.

Slightly shy, Shantae is initially afraid of the citizens of Scuttle Town discovering her status as a half-genie. In addition, she often puts herself down; believing that only being half-genie is not good enough. After being tricked by Risky near the end of the game and subsequently thwarting her plans, she overcomes her insecurity and shyness and comes to terms with these anxieties, and is happy that the townsfolk still accept her.

Shantae has a deep care for her adoptive uncle, Mimic, as well as her friends Sky and Bolo, and at the end of the first game gives up on the chance to enjoy eternal peace in the Genie Realm in order to be with them. She also considers the zombie Rottytops as her friend, although Rotty's own attitude towards her, while friendly for the most part, is more ambivalent, as she does not hesitate in claiming she would like to eat Shantae's brains (which Shantae seems to take as a joke).

In Risky's Revenge, she's shown to have grown more confident, enough to believe that she's the only person able to stop Risky Boots and discarding Mimic's suggestion that Sky and Bolo should go instead. At the end of the game, Shantae is betrayed by Rottytops to Risky Boots in exchange for her brains (although Risky chooses to back down from the deal) and loses her genie powers. She is then shown to be much less self-assured, despite the fact that she manages to defeat Nega-Shantae, which causes Shantae to lose her magic powers. She is then comforted by Bolo, Sky and Mimic, who tell her they will help her protect to Scuttle Town from Risky and other evil forces.

In The Pirate's Curse, Shantae forms a temporary alliance with her nemesis Risky Boots to help stop the Pirate Master, despite not trusting Risky. Over the course of the game, Shantae slowly forms a bit of an attachment to her, asking her if she could "join the good guys for once" and even going as far as saving her life later on. Squid Baron calls Shantae a tomboy at some point. Shantae's more unusual habits are revealed during the game's progression; we learn that Shantae accidentally destroyed Sky's Library Card once by nibbling on it when she got nervous and that she considers herself a bad role model due to her bad temper and fashion sense. Shantae also appears to have low self-esteem (possibly tied to the loss of her magic), as when she was threatened with losing her hair after getting dismissed as Guardian Genie, she says, "They can't take my hair, can they uncle? It's all I have left!". At the end, if the player collects all the dark magic from Cacklebats and gets the true ending to the game, Shantae gets her magic back and is eventually re-hired as Guardian Genie as she was fired in the previous game. After that happens, she is in much higher spirits and appears to have regained some self-esteem. If the player does not collect all the Cacklebats, then Shantae will not get her magic back, and is forced to hope that Risky will eventually take down the Pirate Master on her own.

In Half-Genie Hero, after getting her role as Guardian Genie back, she is tasked with protecting Scuttle Town from various threats like the Giga Mermaid (who reforms after her battle), the Barons of Sequin Land, etc. Unlike in the previous game, Shantae is a lot more confident this time, most likely due to the fact that she got her magic back and is once again a half genie, as well as finally being the town's Guardian Genie again. Despite Shantae getting along with her during the events of Pirate's Curse, she still maintains a strong enmity for Risky due to her being her archenemy as the first thing she says to the pirate is, "Risky Boots! Back to your old tricks, I see." Shantae is also shown to have a short fuse at times when dealing with time wasters, such as Hypno Baron and Squid Baron's merchandising plot.

In the Friends to the End DLC, Shantae's magic gets inverted and she becomes Nega-Shantae, who is a chaotic and evil version of Shantae. Fortunately, her friends are able to defeat Nega-Shantae in Shantae's mind and change her magic back to normal. Once she is restored, Shantae reveals that she had gotten caught up in trying to be a hero to make up for her human half, but forgot that she could rely on others along the way and rushed things. This is a trait that has lead to disaster before (such as losing her magic in Risky's Revenge).

In Seven Sirens, Shantae and her friends go to a tropical island resort where they encounter other Half-Genie allies. At the beginning of the game, Shantae is invited along with the other Half-genies to participate in the Half-Genie Festival. During the performance, however, the Seven Sirens cut the lights and use the cover of darkness to kidnap the other Half-Genies, leaving Shantae alone onstage once the lights come back, much to the confusion of the audience. The next day Shantae begins to feel suspicious, so she decides to venture into the islands underground terrain to uncover its secrets and come face-to-face with the Seven Sirens, freeing the other Half-Genies along the way, despite her allies (specifically Mimic and Sky, though her dialogue implies that Bolo doesn't want her to disappear either) forbidding her to go in an attempt to protect her. This is a good show of Shantae's determination - unlike others, Shantae is not willing to sit around and wait for problems to be solved. She is determined to help those in need, even if it means putting herself in harm's way.

It is mentioned several times that she doesn't know who her parents are, only that her mother was a genie. Although she's willing to explore her genie side, hoping that it will bring her closer to her mother, she turns down the genies' offer to stay in the Genie Realm at the end of the first game, and at the end of Risky's Revenge is shown expressing sadness as being even farther from her half-genie nature (and subsequently her mother) after having lost her magic powers. It is strongly implied in the events of the game that the mysterious Warrior she meets inside the Village of Lost Souls is none other than the spirit of her father, who went into the land of the dead to search for his daughter but never returned. Neither Shantae nor the Warrior himself seem to realize the possible connection.

In 1994, as Matt Bozon was still engaged with his future wife Erin, she got a flash of inspiration while coming back from her camp counsellor days, and created the character of Shantae, named after one of the campers. Later on, Matt Bozon asked her what she would come up with if she was to create a video game character. She disappeared, and when going after her after some time, he found her working on sketches of a character, Shantae, in dancing poses.[2] Matt Bozon liked the idea and fleshed out the background and mythology surrounding the character.

Matt Bozon has provided two contradictory versions of the creation of the Hair Whip. In the first one, he stated that at the time, Erin had very long hair and Matt would often take a blow in his face each time she turned around, which inspired him for Shantae's trademark attack. However, he later stated that Erin's first sketches of Shantae already featured the Hair Whip.[2] Erin also came up with the idea that the character could use dances to conjure animals or charm them.[3] An archived version of WayForward's site from 1997 shows that it was indeed one of the original points of her magics.[4] It was later refined as the transformation dances.[3]

The archived version of WayForward's site also depicts Shantae with a very different appearance, as a brunette with a less manga-ish appearance. She is described as a troubled genie, born without any magic power, although she was capable of hair whipping already.[4]

Her catchphrase, "Ret-2-Go", came from a friend of the Bozons who kept using it in the animation clean up team for the Warner Bros. movie The Iron Giant to break for lunch. The phrase then reached the Shantae team and ended up as Shantae's catchphrase. In Matt Bozon's vision, Shantae uses it because she thinks it's cool but her friends actually can't stand it (although other characters have used it in-universe).[2]

Re-animated version of Shantae (1997) by Hachimitsu-ink

Elephant Form (Early Concept)
Add a photo to this gallery

Shantae in pirate outfit in The Pirate's Curse

Shantae with Risky in The Pirate's Curse

Shantae with a scimitar in The Pirate's Curse

Shantae fighting the Ammo Baron in The Pirate's Curse

Pirate Shantae in The Pirate's Curse.

Matt Bozon's depiction of Zombie Shantae from his Twitter

Harpy Form in the Swamps (GBC)

Back during town navigation (GBC)

Shantae Curled up in a ball 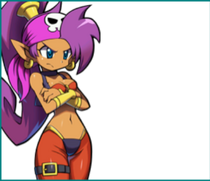 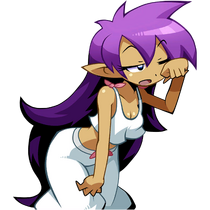 Shantae in her Jammies (Half-Genie Hero) 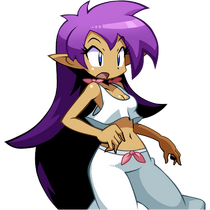 Shantae in her Jammies 2 (Half-Genie Hero) 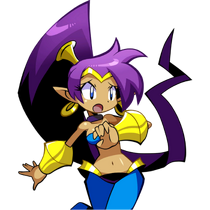 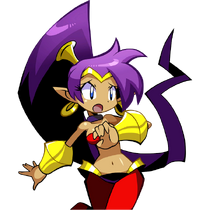 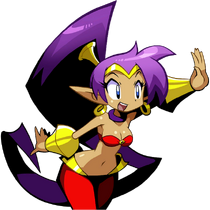 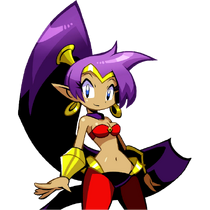 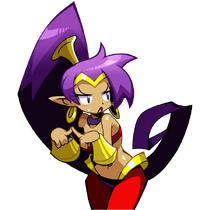 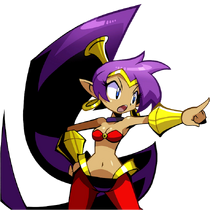 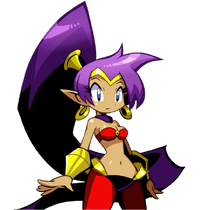 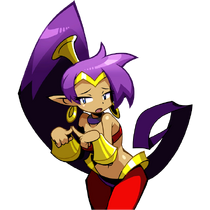 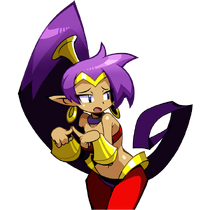 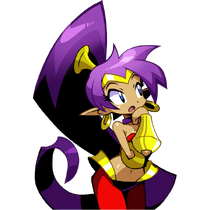 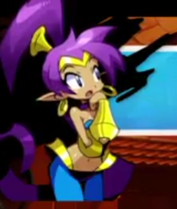 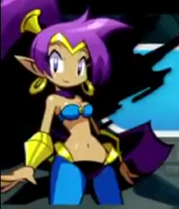 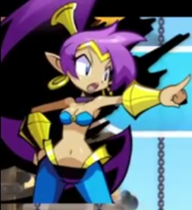 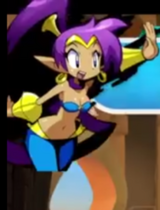 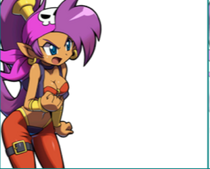 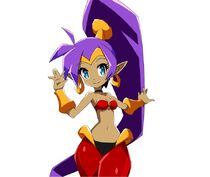 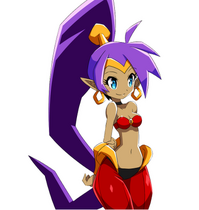 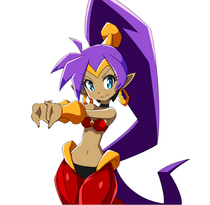 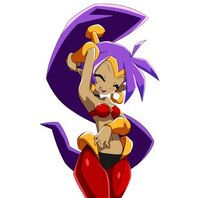 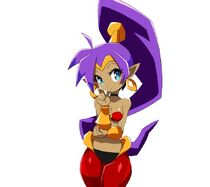 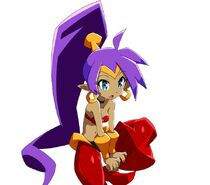 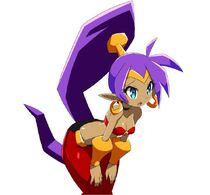 Retrieved from "https://shantae.fandom.com/wiki/Shantae?oldid=25059"
Community content is available under CC-BY-SA unless otherwise noted.