Jake Kaufman
Shantae: Half-Genie Hero is a Kickstarter-funded multiplatform console game. It was released on Wii U, PS4, PS Vita, Xbox One and Steam (Windows PC) on December 20, 2016. A Nintendo Switch port was also released in 2017. The game is the fourth entry in the Shantae series, after Shantae, Shantae: Risky's Revenge and Shantae and the Pirate's Curse.

The game was crowdfunded on Kickstarter from September 2013 to October 2013, but donations were still possible via PayPal on WayForward's official website, and closed on December 16, 2014. The game was originally slated for an October 2014 release, but it was delayed to account for development of the stretch goal rewards. The game was set to be released on September 27th, 2016, but was postponed by "6 weeks give or take", and instead released on December 20th worldwide.[1] It was given a simultaneous digital and physical release on PlayStation 4, PlayStation Vita and Wii U, handled by XSeed Games [2]

The game was followed by a fifth installment, Shantae and the Seven Sirens.

The game takes place after the good ending to Shantae and 'The Pirate's Curse.

Shantae is roused from a deep sleep, suddenly alert. She plunges into the moonlit forest in search of answers. In nearby Scuttle Town she goes to her uncle's home and discovers a mysterious trapdoor. She decides to see where it will lead to and discovers a luminous subterranean cavern. A familiar voice calls out, drawing Shantae to a beautiful fountain. Touching its waters she is immediately spirited away to the fabled Genie Realm. At her feet a magical seal swells as some powerful evil seeks escape. The chamber trembles with a deep, bellowing roar and a light emits from Shantae as everything goes white. Shantae sits upright, back in her bed. Was it just a dream? Or a vision of things to come?

There were five chapters available at initial launch.

Depending on the player's actions throughout the game, one of two endings can be achieved.

Features in the game if certain amount of funding, via Kickstarter and/or Paypal, is reached.

Kickstarter funding ended on October 4, 2013, while Paypal funding ended on December 16, 2014, with a total of $947,937.[3] Risky Mode became Pirate Queen's Quest, while the Hero Modes were merged into Friends to the End. WayForward has stated that the unfounded features will probably never be implemented, although they hadn't close the door to the possibility of downloadable content if the game sells well,[4] which it did. However, the animated cutscenes were carried on to Seven Sirens. More voice acting was also added,[5] although it was still mostly used to "narrate" characters' text boxes.

The music for Shantae: Half-Genie Hero was composed by Jake "Virt" Kaufman. The theme song for the Kickstarter campaign for the game was Dance Through the Danger with vocals by Cristina Vee.

The digital soundtrack will be provided as a reward along with the game to backers with pledges at or above $25.

A physical soundtrack called Risky Beats comes with the physical release of the game.

However, while the game was positively received like the other games, its main target of criticism was aimed at its change of gameplay.

The confirmed crew on the game so far is as follows: 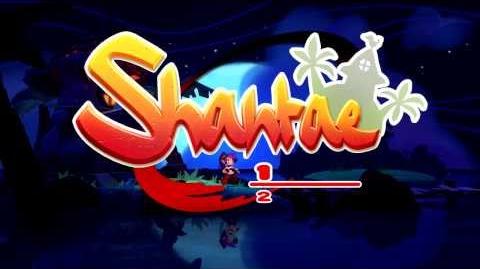 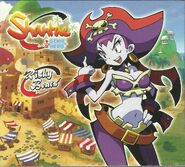 The cover art of the 'Risky Beats' soundtrack.

Shantae and Risky by KOU.

Artwork of the game intro 1.

Artwork of the game intro 2.

Artwork of the game intro 3.

Exemples of forms for Shantae 1.

Exemples of forms for Shantae 2.

Exemples of forms for Shantae 3.

Exemples of forms for Shantae 4.

Exemples of forms for Shantae 5.

Exemples of forms for Shantae 6.