Shantae Advance, also known as Shantae 2: Risky Revolution, was to be a sequel of Shantae for the Game Boy Advance. It was never completed but some of the graphics and ideas were retouched and recycled for Shantae: Risky's Revenge.

The game was to feature the Monkey and Harpy forms, swimming without the aid of a Mermaid form (complete with a dive move), a change of pants (some screenshots show her in cyan-coloured pants rather than her usual red ones), and a multiplayer battle mode. Additionally foreground/background level feature similar to the different planes of depth found in areas in Shantae: Risky's Revenge was intended, including the use of something called the Tremor Engine which allowed Shantae to shift the terrain in the background plane to solve puzzles and access new areas. 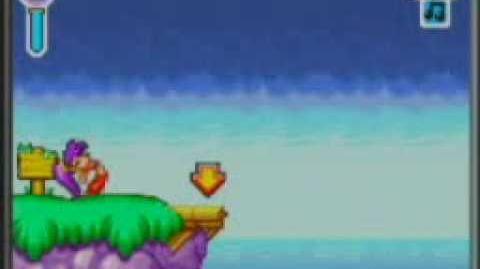 Add a photo to this gallery
Retrieved from "https://shantae.fandom.com/wiki/Shantae_Advance?oldid=20728"
Community content is available under CC-BY-SA unless otherwise noted.