Risky Boots, Tinkerbats, her parents
Sky is a warbird trainer and Shantae's best friend. She lives in Scuttle Town with her friends (Oasis Town in the first game), and keeps a pet bird named Wrench, who she uses to help Shantae get around places quickly.

While an NPC for most of the games, Sky becomes a playable character in Half-Genie Hero's Friends to the End DLC, alongside Bolo and Rottytops.

Matt Bozon has stated that when developing Shantae's universe in the 1990s, Sky's name was actually Twitch, and she had a different design. When the first game was finally greenlit, her character was modified a bit and became Sky. The initial design and name for Twitch were later split into one villain of the same name and another named Vinegar for The Pirate's Curse.[2]

In the first two games, Sky is portrayed tan-skinned, has blonde hair held back by a blue headwrap, and a purple hood. She wears pink and blue earrings in the shape of eggs, a blue tube-top with a pink lining at the top, pink bikini bottoms, a blue and purple sarong, brown wrappings on her shins and right wrist, pink socks and wears a falconer's glove on her left hand. In Risky's Revenge and The Pirate's Curse it is shown that her eyes are brown.

Sky's attire was greatly altered for The Pirate's Curse and still retains the new outfit for both Half-Genie Hero and Seven Sirens. Now Sky's hood has a cape attached to it, her bangs are longer, her eyes turn purple in Half-Genie Hero, her tank top is replaced with a blue, pink and purple girdle, with the breast covering having the same design as her earrings, her sarong and bikini bottoms are replaced with white khaki pants (that is given a buckle in Half-Genie Hero) and a pair of brown boots. While in the princess garb, Sky's hair is revealed to be arm-length and in braids. It is unknown how she fits it all under her headwrap.

Sky is an ally of Shantae's who lives in Oasis Town in the first game, then moves to Scuttle Town in the next installment. Sky owns a loyal war bird named Wrench and a hatchery of some sort where she trains warbirds. Since she's slightly older than Shantae, the half-genie tends to look up to Sky as a mentor of sorts; she tends to defer to Sky's breadth of experience and generally listens when Sky has wisdom to impart. Shantae practically treats her as an older sister, and the two having a very close relationship in spite of the trials and trifles that come from their adventures. They tend to tease one another good-naturedly fairly often.

Sky's also on fairly good terms with Bolo, despite her getting upset with him often and the fact that Wrench thinks that he's edible. However, she doesn't usually tolerate Rottytops, and they fight often, even when they're working together to help Shantae. While Sky can seem selfish at times and tends to be snobby, even towards her own friends, she cares deeply for them, as seen in Risky's Revenge after Shantae lost her powers, and in Half-Genie Hero where she helped save Shantae from dark magic despite pushing her off of Wrench while traveling.

Sky has an adversarial relationship with her parents, indicating that no matter how cool and collected a warbird trainer she may be, she cannot be cool in front of her mother and father. Her mother dotes on her constantly to the point of coddling her, and generally treats Sky like a baby bird, which Sky generally resents. Her father is a relic hunter, like Shantae's Uncle Mimic, but he is far less skilled, having dug up cursed items and dooming her prospective dates on more than one occasion. Sky repeatedly accuses both of trying to ruin her life.

When Shantae arrives in Oasis Town to ask Sky about the Golem Stone, Sky sends out Wrench and directs Shantae to follow the bird into the desert to the Golem Mine.

There Wrench uses his beak to rotate two orb like bolts (revealing the pun behind his name) and after this Wrench goes back to Sky and remains with her. If Shantae visits them again, Sky simply directs Shantae towards her next objective.

In the sequel, Shantae retrieves a (rotten) war-bird egg for Sky and brings it to her. Sky is visiting Scuttle Town with Wrench and Bolo because Mimic has a big announcement planned for the people of Scuttle Town about his latest treasure hunting expedition.

Shantae arrives late and Sky scolds her about her duties. Sky also mentions her week of training war-birds has been awful because all of them have flown the coop. Only Wrench stayed.

After Risky Boots crashes the Relic Hunter Expo and steals the lamp, Sky stays in Scuttle Town to protect it while Shantae's away. She also briefly becomes a part of the quest when Shantae brings in a broken Coffee Machine for Sky and Wrench to fix (so that Shantae can make coffees for the zombie brothers Abner Cadaver and Poe in exchange for their help). After Shantae is done with the Hypno Tower, Sky and Bolo move to Shantae's lighthouse, and inform her there that Mimic is missing. Squid Baron then arrives to tell Shantae he's been abducted by Rottytops), Abner Cadaver and Poe, and from then on, Sky and Bolo simply encourage Shantae to get him back and stay behind until the end. During the ending in front of the lighthouse, after Shantae has lost her genie powers, Sky, Bolo and Mimic promise they will help her protect Scuttle Town from Risky and even Rotty from then on.

At the start of the game, Sky helps defend Scuttle Town alongside Wrench and Bolo against the Ammo Baron and his army. She gives Shantae an auto-potion and advises her to come help them fight. She is later seen on the other side of town, warning Shantae that the Baron is waiting ahead. After his defeat, Royal Guards intervene and warn Shantae that the Baron has the law on his side, and that she's fired yet again. She is summoned to Sequin Land Palace to explain her actions. Sky encourages Shantae to cooperate.

In order for Shantae to get into the Sequin Land Palace Library, she borrows Sky's library card. If Shantae promptly returns the card afterwards, Sky rewards Shantae for her timeliness with 100 gems.

Sometime later Sky catches Barracuda Joe trying to remove one of her nests (she nearly breaks his arm off), they then get to talking over coffee and hit it off. When Shantae meets her again in her home in Scuttle Town, Sky's parents are there and Sky explains to Shantae how she and Joe got together. Unfortunately for Sky, the sarcophagus her dad brought with him is cursed, and petrifies Joe when he reads its inscription.

When Shantae goes to Tan Line Island, Sky flies there to look for a cure for Joe but she is mistaken for the princess of Tan Line Temple and is captured. Her clothes are taken from her and she is forced to wear a skimpy, metallic, sky blue princess outfit. Shantae soon frees her and the other girls mistaken for the princess and Sky returns to Scuttle Town after the situation is resolved. If Shantae visits her after this event, she makes the half-genie promise that they will never speak of the "princess" outfits ever again.

Later, while Sky is still upset over Joe's petrification, Shantae comes and returns Joe's lost soul to his body, reviving him. Much to her dismay, Joe calls off their relationship and runs out on her, angering her. During the good ending of the game, she seems happy to see Shantae and everyone all right, and appears to have finally let go of her anger.

Sky helps Shantae travel to locations of Sequin Land via Giga Wrench. She also gives Shantae the Bird Whistle which Shantae may use to summon Wrench to "give her a lift" at any time to return to the level select screen. During the first trip to Main Street, Sky shoves Shantae off of Wrench's back, as he can only stay at his gigantic size for several seconds.

When visiting a new level for the first time, Sky will generally offer some trivia or advice about the area before they board Wrench.

Sky, like the rest of Scuttle Town, loses her memory to Holly during Fire and Forget!, but still is able to transport Shantae, implying that she still remembers her Half-Genie friend on some level.

In Officer Mode, Sky is one of the Space Hooligans whom Shantae has to collect on each stage. She has a ball and chain attatched to her ankle, and constantly looks surprised. Notably, this mode is the only time she is seen without her hood.

Friends to the End

Sky, Bolo and Rotty enter Shantae's mind to undo the effects of dark magic brought on by Risky's Dynamo. While trying to help Shantae, Sky and Rotty often fight instead of working together, with Bolo trying to keep the team from falling apart. Sky is the bossiest out of the three protagonists and tries to prove her superiority many times. However, at the end of their adventure, she admits that Bolo's one of the most determined people she's ever known, but her behavior towards Rotty ultimately doesn't change, as seen in the next game.

As a playable character, she is not as gifted in combat as Shantae, Bolo or Rotty, but relies on her birds in both combat and when overcoming obstacles:

Sky appears in the opening cutscene when Shantae and the rest of her friends arrive on Paradise Island. Sky is also seen with the others in the audience during the rehearsal show for the Half-Genie Festival prior to the Seven Sirens kidnapping the Half-Genies, which leaves the audience confused.

Both she and Mimic try to keep Shantae from investigating the kidnappings for her own safety (as well as out of Sky's desire for an actual vacation), but Shantae refuses and sets out on her quest. Sky spends most of the game in her hotel room, enjoying her vacation, while Wrench sits on a nearby perch. She shows up in Armor Town when Shantae meets the Armor Baron. After collecting materials for some armor, both Sky and Shantae end up in the Armor Baron's trap, which leads to Squid Baron holding the pair captive until they are saved by the Lobster Siren. Afterwards, Sky says she's going to give the Armor Baron a piece of her mind, but instead goes back to her hotel room, convinced that Shantae will deal with the Baron on her own. She and Bolo eventually help with the adventure, however - Mimic sends them to accompany Shantae in the Squid Pit to prevent the island's untimely explosion while she rescues Rottytops.

Sky and Wrench are seen in the cancelled Shantae Advance Demo. In the Demo, Shantae is babysitting one of Sky's eggs which she has to retrieve. Wrench was enormous in the demo, and Shantae was originally going to use him as transportation between levels, in a fashion similar to the game Demon's Crest. While Risky Revolution was scrapped, Giga Wrench ultimately returned for Half-Genie Hero, and Shantae's egg-sitting responsibilities made their way into Risky's Revenge.

Sky and her birds' concept art (Half Genie Hero)

Sky's Friends to the end ending image (Half Genie Hero) 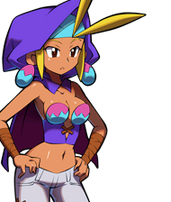 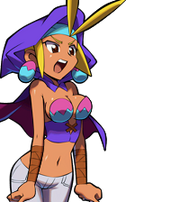 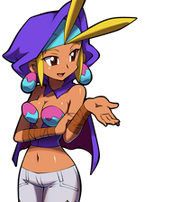