Seven Sirens
The Tubeworm Siren, also known as the Parasite Petting Princess, is one of the Seven Sirens who resides in the Sea Vent Lab.

The Tubeworm Siren has a humanoid form from the waist up. Her body from the waist down consists of a purple mass with an extra "face" and three tubeworms that poke from the mass and act as her minions and "legs". She has white skin above the waist and wears a dark purple bra what shows an underbust. She is the largest non-final boss siren.

Tubeworm Siren leaves the fate of her victims to her pets, but when they can't agree on what to do, she decides to end her victims herself. It is implied that her pets are somewhat unruly, as she mentions a vague incident involving the Empress Siren and warns them not to stain the ceiling.

The Tubeworm Siren has two phases. During the first phase, her Tubeworms pop out to attack. Upon their defeat, she enters the battle herself. Shantae must use her turtle transformation to smash the yellow eye that fires lasers (which shake the ceiling to cause boulders to rain down). That done, the Tubeworm Siren will pop from the ground, dazed and vulnerable to attack. When the Tubeworm Siren is defeated, she explodes, but returns unharmed on one of the win screens, as did the first two. 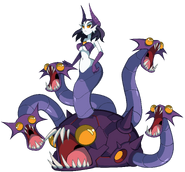 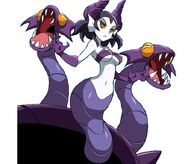