The first time Shantae meets the two girls, they are on vacation on Saliva Island and are upset that there's no water in the pool. Despite this, they set up their picnic (a giant ham), which Shantae uses to open the Giga Lummox's (a giant dragon-like being napping above the pool) mouth to drool spit into the pool. As Twitch and Vinegar show off their "porcelin baby skin" and "cross the beams" they are able to help Shantae progress further by giving her the Petrify spell.

Later in the game, after they finish their vacation, Shantae learns that they work for the Ammo Baron, and finds them fangirl-ing on Bran-Son near Sequin Land Palace. After Shantae gives Bran-Son his enchanted blade so that he can transform, the girls run back to Ammo Baron in Scuttle Town, intent on revealing Bran-Son's secret identity to his archnemesis. Later, as Bolo has inadvertently sabotaged the Baron's cannon in Scuttle Town, the girls are unable to direct the cannon to face the Palace and shoot a large hole into Frostbite Island instead, revealing a hidden dungeon.

Twitch & Vinegar's last appearances are in a cutscene during Shantae's battle with the Pirate Master's true form in which they help Shantae, under command by Risky Boots, by firing cannonballs at the Pirate Master's head to finish him off and save Sequin Land. Afterwards, during the good ending, Shantae runs Ammo Baron and his army out of town.

Twitch & Vinegar return in Shantae: Half-Genie Hero, still working for the Ammo Baron. This time, however, they are now named in-game. They give Shantae a quest to get them some Gator Steaks in exchange for a race ticket. Shantae later finds out they have been stealing magic carpets under orders of the Ammo Baron, and Twitch & Vinegar fight Shantae in their air assault vehicles as the Cape Crustacean mid boss. They are later seen again carrying away Ammo Baron after his defeat.

In the Officer Mode DLC, Twitch and Vinegar can be found dressed in Space Hooligan attire in each level, and need to be arrested for 100% completion.

The creation of the characters actually dates back to the 1990s, as Matt Bozon revealed in an interview that Twitch's name and design were actually those of Sky. When Shantae was developed, he decided to modify the character a bit. Years later, he chose to bring back Twitch as a character for The Pirate's Curse, although he altered her so that she would be split into herself and Vinegar. The Ammo Baron was supposed to introduce them to Shantae by name in the game, but due to a programming error the line took the shaft, and they therefore remained unnamed.[1] In a small promotional comic on Matt Bozon's twitter, Matt later joked about this fact; but the release of cards and wallpapers for the Steam version established Twitch's & Vinegar's official names. The quote "Why am I staring at this totally buff gorgeous loser?" attributed to Twitch on the wallpaper allows to ascertain that the girl with the white top is Twitch as she is the one to say this in-game; making the girl with the orange and blue outfit Vinegar. Their names would later be added in Half-Genie Hero.

Steam Wallpaper that revealed their names: [1]

Twitch on the left and Vinegar on the right. The Ammo Baron girls from the STEAM wallpaper.
Add a photo to this gallery

Twitch saying her quoted line in her soldier outfit

Vinegar in her soldier outfit

Vinegar in her vacation clothes

Twitch in her vacation clothes

Vinegar in her swimsuit

Twitch in her swimsuit
Add a photo to this gallery

Twitch in her Civilian Outfit 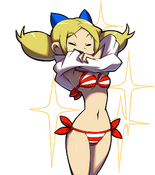 Twitch in her Swimsuit

Twitch's Idle Stance in her bikini 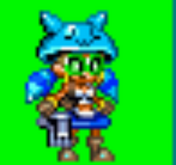 Vinegar in her Civilian Outfit 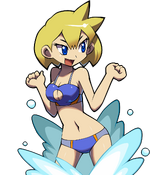 Vinegar in her Swimsuit

Vinegar in Half-Genie Hero
Add a photo to this gallery

Retrieved from "https://shantae.fandom.com/wiki/Twitch_%26_Vinegar?oldid=25208"
Community content is available under CC-BY-SA unless otherwise noted.