Matt Bozon, creator of Shantae and director of Shantae: Risky’s Revenge, was kind enough to take time out of his busy schedule for a brief interview. 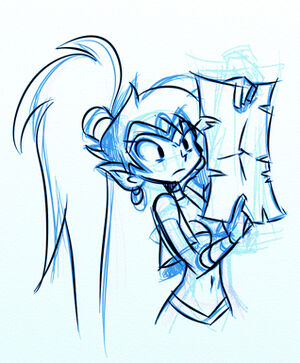 Selachimorpha: A port of Shantae: Risky's Revenge was just released for iOS. Can we expect to see her make an appearance on other platforms, such as Android or PSP?

Matt Bozon: We don’t have anything to announce yet, but the thought had crossed our minds!

Selachimorpha: How are Shantae games made? Do you work on them bit by bit between other game projects, or is it the same process as any other game you work on?

Matt Bozon: That was the case with the original Shantae for Game Boy Color. We started Shantae right after our original title “Xtreme Sports”, and worked on it in the background right up until Game Boy Advance took over. After it shipped, we took the same approach with Shantae Advance, but soon found that we needed a full time dedicated team to pull off a game of that size. On the DS, we had a full team dedicated to the task, and they spent roughly a year to add the necessary spit and polish.

Selachimorpha: At the end of Risky's Revenge, Shantae's situation is changed significantly - no spoilers here, but anyone who beat it will know what I'm referring to. Is this a set up for the story of the next installment?

Matt Bozon: Yes. Risky’s Revenge was originally intended to be episodic. So her character starts out a bit overconfident and aggressive. But, she gets taken down a notch by the end, and we’re left to wonder if she can bounce back. If you’ve played it to the end you’ve seen some scenes of betrayal and missed opportunities, and ultimately the need to place priorities on what’s really important in life. I figured those are all good life lessons that will help build her character. I hope to continue those story threads in future games.

Selachimorpha: The games tend to hint at a larger world that exists outside of the areas explored in the games - mentions of a Sequin Land Palace, hints at a prior more advanced civilization that had steam power, the end of the era of the Guardian Genies etc. Is there a sort of 'bible' (in the TV show industry sense of the term) that you made for Shantae's world, or do you come up with things as they become necessary?

Matt Bozon: Ha ha, I’ve got notebooks and hard drives full of notes and sketches. These areas are outlined, and some have visuals to go with them. I’ve also got entire cast members who haven’t even shown up yet that were designed from the outset. Some are hinted at, others are only implied. There’s a reason for everything, right down to Risky’s deathly skin tone. I don’t think it’s necessary to reveal very much of this in game, but as they say it helps to know what’s in your character’s pockets. I’m planning to visit Sequin Land Palace if another game is in the cards. I also periodically write TV episodes and create storyboards to keep the characters feel alive in my mind. Again, very little of this is necessary in the games, but it helps give me anchor points.

Selachimorpha: This one's for my own curiosity: There's a mountainous island that is visible in the sea from all the coastal areas in Risky's Revenge. There's also screenshot on a few game sites of an area not in the final game - a snowy mountain area with wizards and a grim reaper. Was this mountain area seen in the screenshot going to be for that far off island?

Matt Bozon: No, but that’s a great observation. That island is just there to give the game a tropical feel. I do design under the assumption that there are two coves in Scuttle Town’s shoreline. One where the town used to be, and a much larger one where Scuttle Town now exists. Shantae’s Lighthouse is the last remnant of the old town, and I like to think she lives outside of town because the Mayor doesn’t trust magic and pushed her out. In the original game you can see Risky’s ship docking in Scuttle Town in the distance, and Shantae’s home has a long view of town. In Risky’s Revenge, the distance from her house to town is only a few feet along the pier, but that was just for game pacing. Regarding the snowy mountain -- it was meant to be a frozen wasteland where an Ice Labyrinth was to be located in DSiWare Episode 3. But, that never happened, so it sits on my hard drive along with that Icy Reaper and some candlestick toting ghosts among other things.

That's it! Thanks for your time Matt!

Retrieved from "https://shantae.fandom.com/wiki/User_blog:Selachimorpha/Interview_with_Matt_Bozon?oldid=5541"
Community content is available under CC-BY-SA unless otherwise noted.